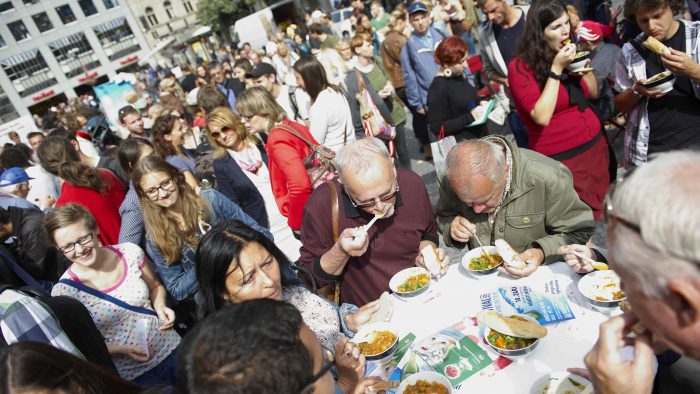 Our first visible and successful event was Feeding the 1000, which took place on
September 10th, 2013. There was a community al fresco lunch organised on Wenceslas Square in the centre of Prague. The feast was prepared from more than 450 kilograms of ingredients which would otherwise be thrown awaydue to the aesthetic demands of the supermarkets or because of their expiration date.

From this feast, we tried to demonstrate that every one of us can prevent or reduce food waste. This can be further explored in our cookbooks. Feeding the 1000, was the first of its kind in the country. It was a huge success and helped to bring attention on the issue of food waste which affects everyone.

We also managed to raise attention on the 15% value-added tax (VAT) which must be paid by merchants when donating food to the food banks. In the course of the year that has passed since the Feeding, this issue was often broached in the media and by the experts. In December 2014, the General Directorate of Finance issued a document allowing the basis of VAT on food donated to the food bank to be close to zero or even zero. In fact, this decision meant that the food donation tax would be abolished.

How does cutting 450 kg of vegetables for Feeding the 1000 look like?